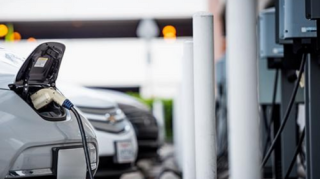 The convenience store in Schumann Business Park in Stewartville is also the first in the state to offer the Level 3,180 kW ABB Fast Charger. Dairyland Power Cooperative worked with Kwik Trip on the offer, providing funding and assistance for the implementation.

"This is the second major milestone for beneficial electrification in our region," said Brent Ridge, Dairyland president and CEO. "Dairyland collaborated with our member Riverland Energy Cooperative on an identical fast charger at a Holmen Kwik Trip in Wisconsin earlier this year. Thanks to the partnership with People's Energy Cooperative and Kwik Trip, we are now expanding this essential infrastructure into Minnesota."

According to Dairyland, the 180 kW fast charger is three times faster than the average charger, giving EV drivers an efficient, convenient "refueling" experience at Kwik Trip.

"This partnership of regional companies is working together to ensure Minnesota and the upper Midwest isn't left behind in the transition to electric vehicles," said Mike Henke, People’s Energy Cooperative president and CEO.

According to news outlet KIMT, there are a reported 475 electric vehicles registered in Olmsted, Fillmore and Mower counties and the cooperatives said the charger will be an accessible, essential and safe resource for drivers throughout southeastern Minnesota.

Founded in 1965, La Crosse-based Kwik Trip operates more than 800 convenience stores in the Midwest. Its stores are known as Kwik Trip in Minnesota and Wisconsin, and as Kwik Star in Iowa.

The new fast charging stations opens as the Biden Administration sets a goal of creating a national network of 500,000 EV chargers by 2030.

The proposed rule would establish the groundwork for states to build federally funded charging station projects across a national EV charging network, an important step towards making electric vehicle charging accessible to all Americans. The minimum standards will ensure a unified network of chargers with similar payment systems, pricing information, and charging speeds, according to the Department of Transportation (DOT).

Though EV adoption has been slow, consumer perception is shifting.  A majority (52 percent) of consumers say they have positive impressions of EVs, compared to only 18 percent who have negative opinions, according to an April survey by NACS.

Nearly half (48 percent) say they have developed a more favorable opinion of EVs over the past few months.

Access to charging outside of the home is an important consideration for drivers. Most Americans (54 percent) say they don't have the ability to charge at work or home, and only 42 percent said they lived in a house or apartment that had a garage suitable for charging, according to the results of a 2020 NACS consumer survey.