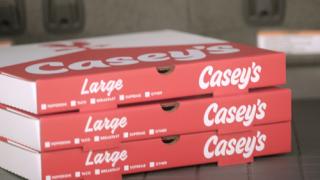 ANKENY, Iowa — Food prices at Casey's have creeped up as the convenience retailer deals with the rising prices of ingredients.

"The adverse impact of higher cheese costs to gross profit was about $3.5 million, or 118 basis points on margin. We took a further series of price increases in the middle of the quarter and another round at the start of fiscal [2023] to further offset these cost increases," he explained. "The team remains committed to maintaining profit margins at historical levels over the long term inside the store."

Cheese costs also remain elevated on a year-over-year basis and are currently running approximately 30 percent higher than in the prior year, he noted.

Casey's reported sales of pizza slices continued to perform well and were up 21 percent in the three-month period which ended in March 31. Hot breakfast sandwiches were up close to 41 percent as part of the company's breakfast menu re-launch that began in September, Bramlage added.

"Margin has been adversely impacted by cost increases in our food ingredients partially offset by menu price increases, along with an uptick in waste as stores kept the warmers full of grab-and-go items to keep up with the higher demand," the CFO said.

According to CEO Darren Rebelez, Casey's gas taken three retail price increases in its prepared foods category since October. The most recent was a few weeks ago, he said during the June 8 earnings call.

Casey's has become well-known for its pizza program. The Ankeny, Iowa-based c-store retailer operates the fifth-largest pizza chain in the United States through stores. Notably, the retailer sold more than 85 million slices of pizza.

In September, the convenience retailer introduced its new breakfast menu featuring a handmade signature handheld sandwich that starts with Casey's made-from-scratch dough, which is the cornerstone of Casey's pizza program.

Casey's General Stores operates more than 2,400 convenience stores in 16 states. In the past year, the company expanded its network through the acquisition of Omaha, Neb.-based Buchanan Energy, owner of Bucky's Convenience Stores, a $39-million agreement with Laval, Quebec-based Alimentation Couche-Tard Inc. that included nearly 50 locations in the Oklahoma City market, and a $220-million pact with Pilot Corp. for 40 locations that strengthened its position in Tennessee and Kentucky.