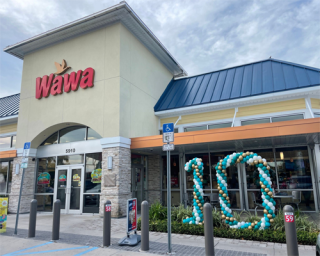 ORLANDO, Fla. — It is a celebration a decade in the making. Wawa Inc. will commemorate the 10th anniversary of the opening of its first convenience store in the Sunshine State.

The Pennsylvania-based retailer will celebrate on July 18 — the day it opened its first store in Orlando in 2012 — by offering free any-size hot coffee and fountain beverages throughout all of its Florida stores.

Additionally, as part of the anniversary celebration, the Wawa Foundation, the philanthropic arm of Wawa Inc., will launch the Florida 10th Anniversary Fund. The endowment will have a total of $100,000 in donations to be spread across 1,000 local nonprofits in areas surrounding health, hunger, and everyday heroes. Grant amounts will vary between $1,000 and $2,500.

Eligible nonprofits are invited to apply by Aug. 31.

Since 2012, Wawa and the Wawa Foundation have provided more than $10 million in community support across Florida, according to the company.

"Though it's been 10 years since Wawa first opened its doors in the Sunshine State, it feels like we've been here for even longer as we've been fortunate to develop so many lasting relationships and meaningful connections over the past decade," said Wawa President and CEO Chris Gheysens. "We're thrilled to offer all Florida customers free coffee on July 18 and celebrate that with the launch of the Florida 10th Anniversary Fund to support all the nonprofit organizations that give back to our communities in countless ways, every day. Cheers to 10 years in the Sunshine State and to many more decades of growth and fulfilling lives in Florida."

Located on Central Florida Parkway across from SeaWorld Orlando, Wawa's first c-store in the Sunshine State was 10 years in the making, according to then-CEO Howard Stoeckel.

"This is where we want to be. Florida is our future," he told Convenience Store News during an up-close and personal look into the store the day before it opened.

Over the past decade, Wawa has expanded throughout Florida and will open its 250th convenience store in the state later this year.

Additionally, with plans to double its footprint within the next decade, Wawa is zeroing in on the Florida Panhandle region, along with adjacent markets in South Alabama, Convenience Store News recently reported.

The convenience retailer "is actively looking" into sites for new stores in the Florida markets of Pensacola, Panama City and Tallahassee, along with Mobile, Ala. Wawa currently plans to open up to 40 convenience stores in these markets. The first stores are expected to welcome customers in 2024.

Wawa also plans to grow in its existing markets and is slated to open 54 new stores in 2022. It also plans to enter new adjacent markets in the next few years.

Gheysens recently told the Business Journal that the retailer is preparing for its "most aggressive growth" in the company's history. As a result, the retailer will just about double its store count in the next decade.

Today, Wawa operates roughly 965 c-stores throughout Pennsylvania, New Jersey, Delaware, Maryland, Virginia, Florida and Washington, D.C. It wants to operate approximately 1,800 locations by 2030, eventually cutting the ribbon on up to 100 c-stores a year.