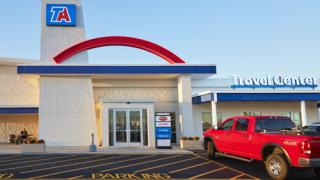 WESTLAKE, Ohio — TravelCenters of America Inc. (TA) began its transformation journey with a focus on operational efficiencies. Now, the company is turning its attention to growth.

"This acquisition is important to TA as it adds a flagship location to our company-owned sites as this is an iconic location and will be the largest travel center in the United States based on number of truck parking spaces once current construction is completed," he said.

Without adding much detail, Pertchik said the site is in the Southeast.

The company also reached an agreement to acquire a small truck service facility and is slated to close the deal in late March. "This strategically located acquisition will allow us to better serve our key customers in one of our highest-growth business segments: mobile maintenance," the chief executive noted.

Aside from acquisitions, TA is developing two new ground-up travel centers on land it previously owned. These travel centers are expected to open by the end of the year.

"And we have 15 to 20 potential acquisition sites totaling approximately $150 million moving through the later phases of consideration," Pertchik reported.

"Investing in growth also includes our robust site refresh program, which was launched this past October with the reopening of Seymour, Ind., the first of more than 100 planned refreshes to be completed no later than early next year," Pertchik added. "Seymour represents our top-level platinum refresh level and showcases many of the new design concepts that are being rolled out amongst many of the other 100 refreshes."

TA expects to complete the first 50 refreshes by the end of March 2022.

Other areas of current investment are upgrades and key additions to its staff; expanding its digital and traditional marketing and sales efforts; several operational initiatives; and IT and systems improvements, according to Pertchik.

"All of these investments and improvements are designed around improving our guest experience based on a more examined understanding of their needs, and intended to drive efficiency and financial performance," he said. "Overall, I remain confident in our robust capital plan and the positive impact it will have in our already established and resilient financial performance."

Following the impact of supply chain disruptions on the pace of its capital deployment in 2021, "TA is focused on choke points and is taking steps to assure capital can be deployed as planned in 2022 and thus far, the pace has increased," he added.

Westlake-based TravelCenters of America Inc. has more than 18,000 team members at 276-plus locations in 44 states and Canada, principally under the TA, Petro Stopping Centers and TA Express brands. TA operates over 600 full-service and quick-service restaurants and nine proprietary brands, including Iron Skillet and Country Pride. Its specialized business unit, eTA, focuses on sustainable energy options for professional drivers and motorists, while leveraging alternative energy to support its own operations.