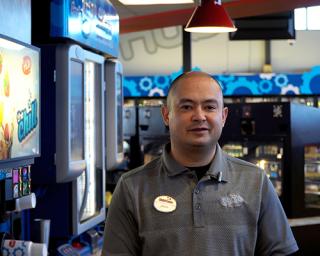 DICKINSON, N.D. — New NACS Chairman Jared Scheeler didn't intentionally set out to be a part of the convenience store industry. A walk into the job placement center while attending the University of Minnesota-Twin Cities altered his career path.

As a business major, Scheeler envisioned himself working for corporate America and had his eye on the airline industry. But on that day in 1998 when he walked into the job placement center looking for part-time work, he saw a posting for Bobby & Steve's Auto World, a new-age, modern convenience store/service station on the edge of downtown Minneapolis.

Familiar with the business, he was in awe of what the company had built and its business model, which combined a large-scale convenience store with a proprietary restaurant, auto repair, eight service bays, tow trucks, and a car wash. Describing Bobby & Steve's as a "c-store on steroids," Scheeler applied for the opening as a cashier and started shortly after.

"As I started working at Bobby & Steve's and started taking on more responsibilities, I soon realized I really, really loved the entrepreneurial spirit of the ownership of that company and how they made decisions for themselves and for their business every day, and just fell in love with the industry," the 2021-2022 NACS chairman told Convenience Store News. "I quickly decided I didn't want to work in corporate America and wear a suit and tie every day. I wanted to be in a business where I'm calling the shots and can use my creativity, where the success of the business lives and dies with me. From a business standpoint, I don't think there's anything better than that."

Scheeler moved up the ladder at Bobby & Steve's, running its flagship store before being promoted to director of retail operations in 2010. He held this role until 2013.

During this time, the company decided, at Scheeler's encouragement, to start a corporate entity to bring oversight to all of its locations. Bobby & Steve's business model at the time was formulated as eight stores operating independently. Scheeler thought the company was missing out on synergistic opportunities and buying power between the stores and wanted to bring unity and consistency across the organization.

By 2013, however, a mixture of events pulled Scheeler and his family in the direction of setting up a home in Dickinson, N.D. And from a business standpoint, he wanted to start his own business and felt that if he was going to make the leap, then he had to do it then. At the same time, he and his wife Deann had a desire to raise their children where they grew up and where they would be surrounded by family.

That combination of factors compelled Scheeler to start The Hub Convenience Stores Inc. The business was born with a single location. Today, The Hub has five locations throughout the state and Scheeler heads the company as CEO, overseeing everything outside of the intricate day-to-day operations — from sales and marketing to human resources, accounting, purchasing, supplier relations, and facilities management.

Future goals for The Hub include expanding to 10 stores and gaining corporate support.

"When the first store was built, there were a lot of old-school gas stations that hadn't embraced the future and hadn't built a model around food. If they had, it was 'gas station food' and, as we know, the best operators in our industry have moved well beyond that," Scheeler told CSNews. "It was my objective to begin that process in North Dakota, so we built a business model heavily built around food — foodservice, fresh food, healthy and indulgent. More than the store model, we take the time to develop our people and hire the right people so that we can offer an experience that customers in our area don’t really expect."

Scheeler attended his first NACS Show in 2001, which first opened his eyes to the enormity and scope of the industry. Fast forward to 2009 and NACS President and CEO Henry Armour was in Minneapolis for an industry luncheon, which Scheeler attended. He seized the opportunity to express his interest in the association to Armour. It paid off because he was asked to join the Service Membership Committee and a year later, the board of directors.

"...I wanted to stay ahead of the game, be in the know, and become a trailblazer. As a small retailer in Minneapolis, I felt that NACS was going to provide the resources for me to do that. Therefore, I wanted to get involved with NACS," Scheeler recalled.

Now, as The Hub CEO settles into his role as NACS chairman, he aims to encourage fellow small operators to embrace who they are to this industry.

"It seems multiple times a week, we're hearing or reading about another merger and acquisition, but the interesting part of that is that small operators are remaining," he said, noting that there are currently more than 90,000 small operators in the industry. "We play such a vital role in the industry and across the country, so even though the big are getting bigger around us, we need to embrace that. If there's anything I can accomplish in the next year, it is to inspire the small operators across the country."

Three ways Scheeler hopes to encourage small operators across the country are:

Moving Into the Future

Today's "convenience store" looks a lot different than it did 23 years ago when Scheeler got his start in the business. The most significant change the veteran says he's witnessed is the evolution of foodservice technology. He believes these changes are here to stay, so the industry must adapt and learn how to be successful at the last mile, where there are still opportunities.

At just 41 years old, Scheeler knows he has a lot of years in the convenience channel ahead of him, and he's excited to be a part of its growth as a constant student of the industry.

He is also excited to be a leader among small operators and an advocate for them to get to the next level when it comes to competing with other channels and continuing to own the word "convenience" as the industry moves into the future.

"I encourage retailers, especially small retailers, to move faster when it comes to keeping up with changes in the industry. Things are moving quickly across foodservice, technology and fueling — areas that are very difficult to be late to the game in," he told CSNews. "From a strategic standpoint, small operators need to think about those things and research with supplier companies how they can be a part of that new wave, and how they can be a part of the industry's acceleration into the future. If us small retailers don't keep up, there's a chance in 10 years we won't be around."