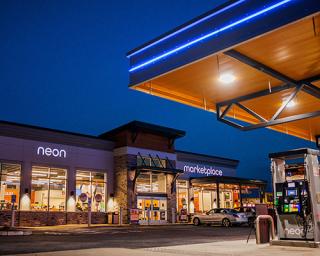 PROVIDENCE, R.I. — Neon Marketplace is a new prototype that aims to dynamically change the perception of convenience stores by delivering premium food in a technology-driven atmosphere.

“The word ‘fresh’ is somewhat bastardized in this channel,” said Elise Babey, senior manager of product development at Neon Marketplace. “Our ‘fresh’ vs. someone else’s, there’s a big difference. And I’ve made it my goal to let the food do the talking.”

“We take the concept and model of a quick-service restaurant, but we’re four of them — all-encompassing — under a food and energy marketplace,” she said.

Neon Marketplace currently operates two full-concept stores, which opened in December of last year and January of this year, one in Rhode Island and the other in Massachusetts. There are also two Neon Marketplace Express stores, both in Rhode Island, which launched the brand in 2020, but don’t offer pizza or the premium café.

To emphasize this point, she discussed the differences between Neon Marketplace’s English muffin breakfast sandwich vs. other c-stores. “We source the highest-quality bacon, and our English muffins are baked fresh daily through a partnership with a local bakery distributor. We cook the English muffin and the egg protein separately; we don’t pop it into a TurboChef. Then, we assemble it. All that just for a little English muffin sandwich,” she said. 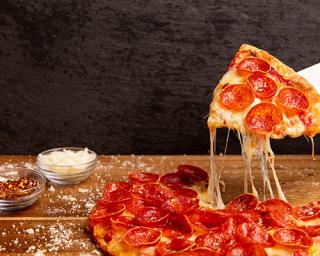 This hands-on approach is carried throughout the retailer’s foodservice program. “We don’t buy pizza sauce by the can, we make it proprietary in-house,” she noted.

Additionally, the Neon Marketplace café program is “a force to be reckoned with,” Babey added, pointing to the chain’s use of the highest-quality beans and roast strengths that are based on the demographics of the New England area. “We spend a lot of time dialing in the coffee itself,” she said, which in industry terms means finding the ideal grind setting for a particular coffee and a specific brew method.

What’s more, Neon Marketplace aims to offer the best of both worlds: coffees, espressos, lattes and other barista-style beverages of a premium level, but at a price more suitable for a convenience store or QSR.

“We don’t choose the easy way out. We want to give our customers a quality experience they’ve never had in any convenience store,” Babey said.

Muted, warm color palettes throughout the store help emphasize the quality of the food, while digital signage and touchscreens, video content at the pump, bright lighting outside and cleanliness everywhere support the technology-driven aspect of the brand.

The growth plan for Neon Marketplace is fairly aggressive for the foreseeable future. All new stores will be ground-up, signature prototype stores.

“Neon Marketplace is a beacon propelling toward the future. It’s about being a trendsetter and ahead of the curve; a modern convenience company,” Babey said.