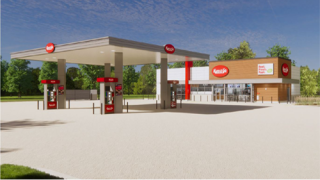 GRAND RAPIDS, Mich. — Kum & Go LC entered its 13th Midwest market with the opening of its first store in the Grand Rapids area on Jan. 19.

Located at 2134 Alpine Ave. NW in Walker, the site is the first of several Grand Rapids area Kum & Go c-stores set to open in the next year. A second location, at 5437 Division Ave. South in Wyoming, will open on Jan. 26. Two sites are currently under construction in Grandville and are expected to open in the next few months.

Kum & Go will hold a grand opening celebration and ribbon cutting ceremony on Jan. 30 from 10 a.m. to noon at the Wyoming location to celebrate the opening of both stores.

"Opening our first location in Grand Rapids is certainly a highlight to start off 2023," said Kum & Go CEO Tanner Krause. "We're excited to bring our fresh perspective to the convenience industry to the people of Grand Rapids, both in the jobs we create and the healthier products we offer. The more we've learned about Michigan, the more excited we are to invest here. We look forward to connecting with this community for years to come."

The Des Moines, Iowa-based c-store retailer announced plans for expansion into the Michigan market in 2021.

"The Kum & Go team is thrilled to be opening our first locations in Grand Rapids," said Graham McCaleb, district supervisor at Kum & Go. "Grand Rapids quickly felt like home after moving here last summer and I'm excited to be a part of introducing Kum & Go to this thriving community."

Kum & Go's Grand Rapids locations will feature the retailer's open-concept designs and brand new food program, which was introduced in 2021. The elevated, made-to-order program was designed to be more on par with fast casual restaurants, as Convenience Store News reported.

Rooted in the company's purpose to "Make Days Better," and with a focus on three pillars of excellence — including people, philanthropy and planet — Kum & Go is currently partnering with Habitat for Humanity of Kent County, sponsoring a home build in Grand Rapids' Baxter Neighborhood. The nine-home community is being built with a focus on energy-efficiency and expected to be completed this spring.

Kum & Go is currently hiring for multiple positions across all Grand Rapids area stores. The company offers full-time and part-time positions starting at $15 per hour for store associates and $16.25 per hour for food associates. Full time positions offer a comprehensive benefits package and set schedules with consistent hours, according to the retailer.

Grand Rapids is the second of Kum & Go's new market ventures. The c-store retailer entered the Salt Lake City market in December with the opening of a Kum & Go store in Draper. It is the first of several locations set to open in the Salt Lake City area over the next year.

Kum & Go is also set to enter Boise, Idaho, later this year, followed by Detroit in 2024.

Established in Hampton, Iowa in 1959, Kum & Go is a fourth-generation, family-owned convenience store chain that operates more than 400 c-stores.