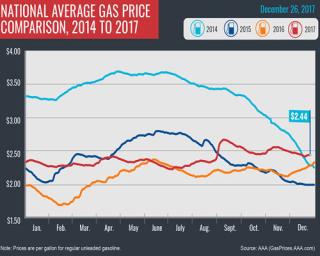 ORLANDO, Fla. — As more drivers hit the road for the holidays, the increase in driving demand is likely the cause for increases in some states, according to AAA.

Heading into the final week of the year, the national average price for a gallon of gas is $2.44, an increase of 2 cents on the week. Today's average is about 26 cents per gallon higher than one year ago.

Despite an incremental jump, drivers in 33 states are paying less on the week, as much as 9 cents. The cheapest gas can be found in Alabama ($2.17), while Hawaii ($3.29) sells the most expensive.

"The majority of motorists have seen savings at the pump this month. The national gas price average is over five cents cheaper than the beginning of December," said Jeanette Casselano, AAA spokesperson. 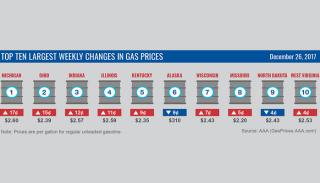 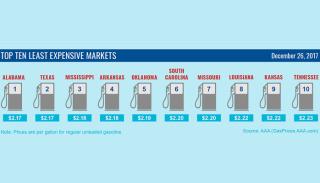 As prices continue to drop on the week, Alaska saw the largest decline (9 cents), while Washington, Oregon and Nevada each dropped 1 cent, and Hawaii and California saw no change.

Across the Great Lakes and Central regions, gas prices are as cheap as $2.20 in Missouri and as expensive as $2.60 in Michigan. On the week, gas prices continue to decrease for the majority of states in the Central Region with North Dakota (4 cents), Kansas (2 cents) and South Dakota (2 cents) seeing the largest drops at the pump.

Conversely, motorists saw some of the highest weekly increases in Michigan (17 cents), Ohio (15 cents), Indiana (12 cents), Illinois (11 cents), Kentucky (9 cents), Wisconsin (7 cents) and Missouri (5 cents). Throughout the year, these regions have been some of the most volatile — seeing prices take large jumps and declines from week to week, AAA reported.

While gas prices are more expensive nationally compared to last year, Florida motorists are only seeing a 3-cent difference, which is the smallest year-over-year difference in the region and the country.

For the Mid-Atlantic and Northeast region, gas prices range from a low of $2.23 in Tennessee to high of $2.69 in Pennsylvania and Washington, D.C. With a 12-cent price difference, Delaware saw the largest monthly decline in gas prices in the region.

In the Rockies, drivers in Montana ($2.58) and Idaho ($2.54) are paying the most to fill up at the pump of any states in the region. Idaho, Colorado, Utah and Montana saw the largest drops (3 cents) at the pump for the region.