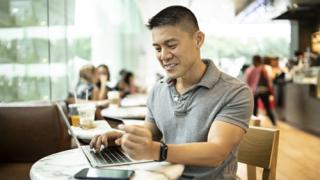 NEWTON, Mass. — A new report is shining a light on tech-savvy consumers and loyalty.

The latest report in the ongoing series "The Digital Divide: How High-Tech Consumers Connect to Subscription and Loyalty Offerings," found a definite correlation between technology adoption and eagerness to join loyalty programs or subscription services.

The series is a collaboration between PYMNTS and Paytronix Systems Inc.

High-tech consumers — those who own the greatest number of connected devices — are, in general, particularly eager to engage with their favorite restaurant brands, as are millennials and bridge millennials, according to Paytronix.

According to the report, 60 percent of high-tech consumers participate in loyalty programs at quick-service restaurants (QSRs) and 75 percent participate in loyalty programs at table-service restaurants. Additionally, high-tech consumers are far more aware of and eager to adopt subscription programs, with 40 percent being "very" or "extremely" familiar with restaurant subscription services, more than double the 21-percent average for the general sample surveyed.

As Paytronix reported, restaurant loyalty programs deepen already strong relationships between brands and existing customers. Many of these valuable consumers are eager to try subscriptions, a development that has strong potential for both table-service restaurants and QSRs.

Restaurants that adopt these initiatives — both loyalty programs and subscriptions — will be best positioned to succeed in today's competitive era of dining, added the Newton-based provider of SaaS customer experience management solutions for restaurants and convenience stores.

Key findings in the report include:

The ongoing series examines consumer relationships between technology and both QSR and table-service restaurant loyalty programs. PYMNTS and Paytronix surveyed 2,207 consumers in the U.S. between Jan. 11 and Jan. 17, 2022 about their experiences. The respondents' average age was 48, 52 percent were female and 36 percent earned more than $100,000 annually.