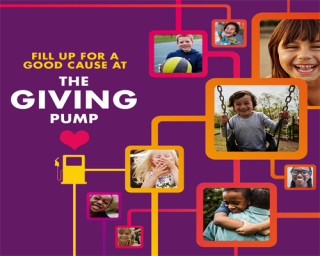 HOUSTON — Shell Oil Products US is bringing back "The Giving Pump" initiative benefitting local children's charities after a successful pilot of the program.

The second year of The Giving Pump kicked off Aug. 1 and will run through Oct. 31 at participating Shell stations across 48 states. A portion of the purchases made by consumers who use the designated pump at select Shell stations will support 547 local children's charities.

The Giving Pump will be specially marked at participating stations with colorful signage to inspire consumers to fuel up and support a range of children's focused nonprofits, including children's hospitals, schools, literacy programs, and youth-based food pantries. Some of the organizations benefitting from the campaign include Boys & Girls Club, St. Jude Children's Research Hospital, Shriner's Hospital for Children, Make a Wish Foundation, and Autism Speaks.

Last year, more than 2,900 Shell stations participated in The Giving Pump. This year, the number of stations more than doubles to 6,500.

"We are thrilled to bring back The Giving Pump to make an even bigger impact this year and give customers the chance to support local charities across the country," said Shannon Bryan, manager of brand and communications for Shell Retail US. "We encourage our customers to pay it forward at the pump and choose The Giving Pump on their next fill up or road trip pit stop to help us fuel the future of local communities."

In 2021, Shell wholesalers and retailers donated more than $1.5 million, supporting 400-plus children's charities through The Giving Pump program. In the United States, the designated giving pumps were used 7.2 million times and pumped 72 million gallons of gas.

The Giving Pump is part of Shell's Force For Good initiative. Since launching Force For Good, the company has highlighted the impact Shell wholesalers have in the communities in which they operate in, going beyond fuel quality and loyalty.

Participating Shell locations in The Giving Pump campaign can be found here.

Headquartered in Houston, Shell Oil Products US is an affiliate of Shell plc, a global group of energy and petrochemical companies with operations in more than 70 countries. In the United States, Shell operates in 50 states.

Shell is not the only fuel retailing doing good through the forecourt. Savannah, Ga.-based Parker’s, operator of 71 c-stores across Georgia and South Carolina, also supports local children’s charities through its Fueling the Community program.

Founded in 2011, the longstanding charitable initiative donates a portion of every gallon of gas sold on the first Wednesday of each month to area schools in coastal Georgia and South Carolina.

As part of the Fueling the Community program, Parker's recently donated $74,000 to the Savannah-Chatham County Public School System.

"At Parker's, we have a powerful commitment to the Savannah community and are incredibly proud to be headquartered in America's most beautiful city," said Greg Parker, founder and CEO of Parker's. "Education is vital to the overall success of our community, so we consider this donation to be an investment in Savannah's future leaders and a symbol of our ongoing support for the dedicated teachers in the Savannah-Chatham County Public School System."

Since its inception, the Fueling the Community program has given more than $1.8 million to area schools.