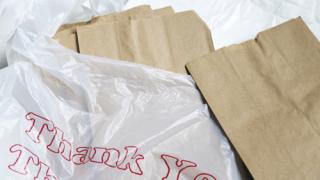 PITTSBURGH — Giant Eagle Inc. is doubling down on its commitment to the environment by discontinuing single-use plastic bags at its stores.

The decision goes into effect on Earth Day, April 22, at its Giant Eagle supermarkets. Instead of single-use plastic grocery bags the retailer will incentivize guests to use environmentally friendly reusable bags.

"As a retailer that has been committed to giving back to the communities it serves for more than 90 years, Giant Eagle recognizes its role in providing future generations with a healthy planet," the company said. "The company’s ambitious goal to eliminate single-use plastics throughout its operations is part of Giant Eagle's larger strategic sustainability platform inclusive of achieving significant milestones related to waste, carbon emissions and sustainable products."

Cuyahoga County and Erie are the first two Giant Eagle communities where single-use plastic grocery bags will be removed from its supermarkets beginning this Earth Day. In the coming months, the retailer plans to roll the initiative to its supermarkets across other regions.

The company is launching a reusable bag sweepstakes, providing guests who shop with a reusable bag multiple opportunities every month to win $10,000.

To further encourage the use of reusable bags, Cuyahoga County and Erie Giant Eagle stores will charge a 10-cent fee per paper bag used, ensuring that paper bags continue to be available for interested customers.

Many states and cities have enacted single-use plastic bag bans. Across the state from Giant Eagle, Philadelphia's ban went into effect on Oct. 1, 2021, after it was delayed several times because due to the COVID-19 pandemic and its effect on small businesses. Businesses can still offer paper bags to customers who don't bring their own reusable bags. The city initially issued warnings but was slated to begin issuing fines to noncompliant businesses on April 1.

Ahead of that city's rule, Wawa Inc. gave away 1,000 reusable shopping bags at its Philadelphia c-stores.

New Jersey will become the latest state when its ban goes into effect on May 4. However, the state's new regulation goes a step further and also bans paper bags at grocery stores, including big-box stores like Costco and Target if they have large grocery sections of at least 2,500 square feet.