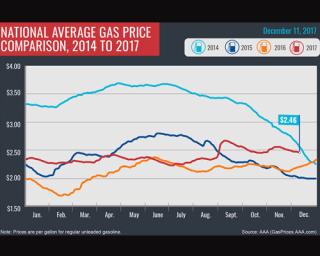 NATIONAL REPORT — Drivers across the U.S. are seeing lower prices at the pump.

According to AAA, the national average price for a gallon of gasoline dropped 2 cents on the week to $2.46. While the East Coast and Midwest states are seeing the largest drops in gas prices — as much as 6 cents — in the last week, a small number of states that historically experience ongoing volatility are seeing increases: Indiana (11 cents), Michigan (8 cents), Ohio (4 cents), Hawaii (1 cent) and Illinois (1 cent).

“Nationally, gas prices are 10 cents cheaper on the month and will continue to drop as we count down the days to the holidays,” said Jeanette Casselano, AAA spokesperson. “AAA expects gasoline demand to weaken throughout the winter, which translates to better prices at the pump.”

In the Central and Great Lakes region, gas prices range from $2.22 (Missouri) to $2.51 (Michigan). In many states, drivers are paying as much as 5 cents less at the pump compared to last Monday, except for those filling up in Indiana (up 11 cents), Michigan (up 8 cents) and Ohio (up 4 cents).

Even though gas prices drop for every state in the Mid-Atlantic and Northeast region, two states have the top 10 largest declines: Delaware (4 cents) and Maine (4 cents). Despite recent declines, Washington, D.C. ($2.70) averages among the most expensive gasoline in the region along with Pennsylvania ($2.73), Connecticut ($2.67) and New York ($2.65).

Compared to one month ago, motorists in the Mid-Atlantic and Northeast are paying less for a gallon of gasoline, with Delaware (-14 cents) seeing the largest regional drop, AAA reported. 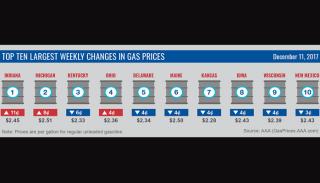 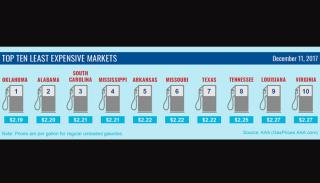