Convenience store retailers have so much to juggle inside their four walls on a typical day that the last thing they want to think about is something happening just a few feet beyond those big, pretty display windows — in the parking lot.

For most c-stores, the customer parking area begins just a couple of steps from the front door and consists of six to 12 “nose-in” spaces so that vehicles are perpendicular to the storefront. Those spaces look so innocent, so simple, so convenient. They’re ready for a customer to use at a moment’s notice — easy in, easy out. Customers don’t think twice about them. Actually, some customers don’t seem to think at all as they whip into an open spot.

Consider this: Research recently published by Texas A&M University (and co-authored by Reiter) concluded that “up to 20 vehicle-into-building crashes per day or 7,300 per year could be occurring at the 150,000 convenience stores in the United States.”

That’s a startling statistic. Yesterday, about 20 stores got hit. Today, another 20 or so will. We’d love to say the pattern for tomorrow will be different, but it’s a problem that just doesn’t go away on its own — and it’s costing millions of dollars in property damage plus hundreds of injuries and fatalities every year.

Personal Experience
For Wright, the statistics are personal. He didn’t discover the bad news about vehicle-into-building accidents by reading. He found out the hard way: by getting hit as he was about to walk out of his then-favorite convenience store in 2008.

Few things in life grab your attention quite as effectively as a car coming straight at you. Wright was lucky. It only took him nine months to recover and he can use the leg that got injured. Some of the people who get hit in these accidents lose one or more limbs — or their life.

Guess who else panics when a car comes crashing into a store: the owner and manager (not to mention anyone else inside or nearby). Talk about a bad day, even if good fortune prevails and nobody is physically hurt. 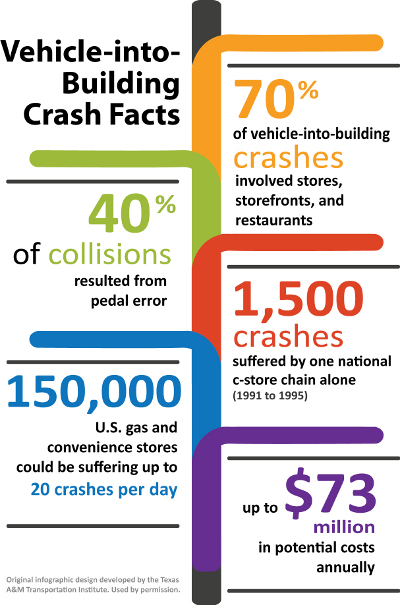 commerce on hold — sometimes only for a few hours, sometimes for a few days and in the worst cases, permanently. Often, the store has to be closed and inspected by an engineer for structural integrity.

Employees have to sweep up broken glass, mop up fluids, deal with damaged goods, restock collapsed shelves and generally put the place back in working order. They’re on the phone to whomever they need to contact to deal with the aftermath and hopefully get ready to re-open — company management, insurance representatives, window replacement services and others.

Oh, and all those flashing lights on first responders’ vehicles are great for attracting attention to a store. It’s probably not the kind of attention a retailer craves, but it sure is memorable for anyone at the scene.

Sitting Ducks
While no business is immune, high-turnover store locations such as convenience stores suffer many more accidents than locations with fewer visitors or separate parking facilities. Not surprisingly, companies and chains with the greatest number of stores seem to suffer the largest number of documented crashes. Think U.S. Postal Service, Starbucks, Subway, 7-Eleven and Dunkin’ Donuts.

The reasons vary, but include:

Convenience stores with nose-in parking spaces, in particular, are sitting ducks because of driver “pedal error.” Most commonly, pedal error occurs when a driver is pulling into the parking space and accidentally hits the gas pedal instead of the brake. Pedal error causes as many as 40 percent of these crashes. 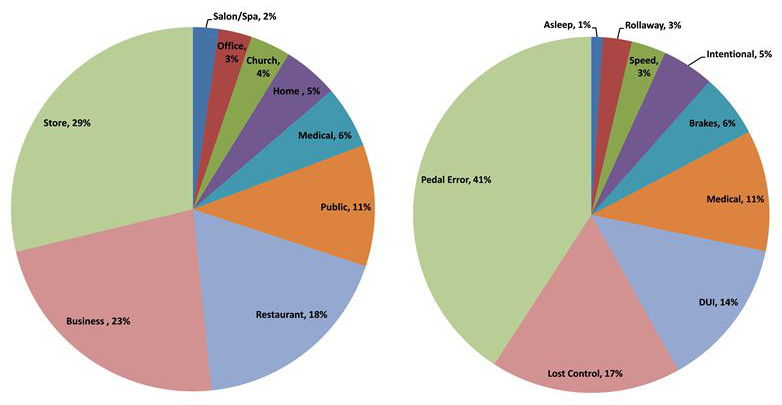 One common thread with the majority of these “storebuster” accidents is that most of the drivers are store customers. Only a small percentage of these crashes are caused by traffic-related accidents. Most are caused by customers on their way into or out of the store. And while some involve an impaired driver, a medical emergency or a deliberate ram-raid attack (sometimes called a smash and grab), most are literally very straightforward accidents.

Solutions vs. Delusions
There are various technologies and design elements out there that contribute to storefront safety, but not all are effective. Curbs and wheel stops offer virtually no protection. They may look like they would, but they don’t. Most c-store curbs are way too shallow to act as a barrier. As for wheel stops, instead of stopping a moving vehicle, most have a tendency to lift and launch it forward.

A much better approach is to eliminate nose-in parking spaces and install ASTM-grade barriers or steel bollards. ASTM International is developing a proposed new standard for testing low-speed vehicle barriers to be installed to protect storefronts and other pedestrian areas from errant vehicle crashes.

Convenience stores that take no preventative measures against “pedal error” and other driver mishaps needlessly put their business — including their customers and employees — at risk.

Rob Reiter and Mark Wright co-founded the Storefront Safety Council. Reiter is a safety and security consultant who works with Blockaides Inc., a California barrier company. Wright publishes StorefrontCrashes.com and is a freelance writer.