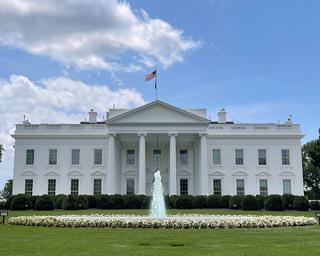 WASHINGTON, D.C. — As gas prices rise nationwide and are expected to continue doing so as the peak summer driving season approaches, the White House is considering all options to ease the pain on drivers.

During a press briefing, a reporter brought up a letter sent by a bipartisan group of lawmakers that have called on the White House to lift the ban on summer sales of gasoline with higher blends of ethanol, which are purportedly cheaper than traditional gasoline.

"The President and our national security team and our economic team are working overtime right now to evaluate and examine a range of domestic options that continue to be on the table, and also to engage with global suppliers about what can be done to ensure that the supply in the market meets the demand, thus bringing the price down," Psaki added in her statement.

A bipartisan group of senators, led by Sens. John Thune (R-S.D.) and Dick Durbin (D-Ill.), on March 9 sent a letter to President Joe Biden urging him to increase access to higher blends of American biofuels in an effort to curtail rapidly increasing gas prices.

In the letter, signed by 16 senators, they request President Biden use his administrative authority to permit the sale of E15 fuel during the 2022 summer driving season, extending the Reid Vapor Pressure Waiver from June 1 through Sept. 15.

Following the issuance of this letter, Growth Energy and the Renewable Fuels Association applauded the move by the 16 senators, with Growth Energy CEO Emily Skor stating, "The message from both sides of the aisle in Congress is clear: we need more homegrown, low-carbon solutions to address rising gas prices and shield American drivers from the continued volatility in the global oil market."

NACS, the international trade organization representing the convenience store industry, and SIGMA, America's Leading Fuel Marketers, sent a letter of their own on March 9 to the U.S. Environmental Protection Agency, encouraging the government organization to exercise its waiver authority pursuant to Section 211 of the Clean Air Act to authorize the year-round sale of gasoline blended with up to 15 percent ethanol.

"Congress has expressly authorized EPA to take this action in response to 'extreme and unusual fuel or fuel additive supply circumstances' that prevent the distribution of an adequate supply of fuel or fuel additive to consumers, provided such circumstances are the result of an 'event that could not reasonably have been foreseen or prevented and not the lack of prudent planning' on the part of fuel suppliers, and it would be 'in the public interest' to exercise its waiver authority," the NACS/SIGMA letter stated. "In recent weeks, oil prices have risen at an extraordinary pace due, in large part, to geopolitical unrest in Europe and inflation rising domestically at a faster pace than at any time in more than 40 years. Neither of these trends appears likely to dissipate in the coming months.

"This will result in continued, increasing pressure on transportation fuel markets that will make it challenging to ensure consistent gasoline supply in all regions," the NACS/SIGMA letter continued. "If additional, currently unforeseen developments arise, these challenges could become even harder to overcome. Fuel marketers and retailers could not have planned for these events. Allowing the year-round sale of E15 in all parts of the country would help enhance supply and lower prices for all American fuel consumers."