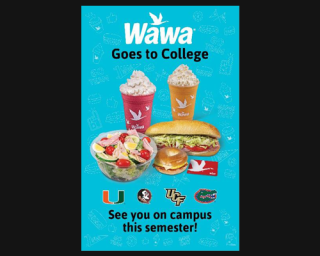 The Pennsylvania-based convenience store retailer kicked off its first-ever college athletics sponsorship of four universities in Florida. Wawa has been designated as the official hoagie for the University of Miami and the University of Central Florida's (UCF) football teams, Miami Hurricanes and UCF Knights, respectively.

The multiyear partnership runs through the football season and extends to other athletics, including men's and women's basketball, soccer, softball and baseball in select markets. As part of the sponsorship, Wawa will offer sweepstakes, in-store promotions, sampling at select events and on-site activations.

"Wawa just celebrated its 10th anniversary in the Sunshine State and as we continue to grow, we're excited to stretch our wings to officially support student athletes in Florida," said Jim Morey, chief marketing officer of Wawa. "We look forward to cheering student athletes on the sidelines with fresh food, beverage and fun experiences and giveaways."

Over the past decade, Wawa has expanded throughout Florida and will open its 250th convenience store in the state this year. The company is also "actively looking" into sites for new stores in the Florida markets of Pensacola, Panama City and Tallahassee, along with Mobile, Ala.

Wawa's new college athletics sponsorship follows on the heels of the kickoff of Schwarber Fest, a limited-time spinoff of the retailer's annual HoagieFest campaign. Getting into the swing of baseball playoffs, the promotion was inspired by Philadelphia Phillies outfielder Kyle Schwarber, who hit more than 20 homeruns during this year's HoagieFest.

With the Philadelphia Phillies preparing to face the Houston Astros in the World Series on Friday, Oct. 28, Wawa extended the promotion through Major League Baseball's Fall Classic.

Wawa operates roughly 965 c-stores throughout Pennsylvania, New Jersey, Delaware, Maryland, Virginia, Florida and Washington, D.C. It wants to operate approximately 1,800 locations by 2030, eventually cutting the ribbon on up to 100 c-stores a year.