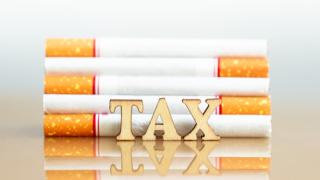 WASHINGTON, D.C. — Several federal legislators joined together to introduce the Tobacco Tax Equity Act of 2021 in the U.S. Senate and the House of Representatives.

In addition to closing loopholes in the tax code, the bill would establish the first federal electronic cigarette tax and increase the tobacco tax rate for the first time in a decade.

"Tobacco-related disease accounts for one out of every five deaths in America, and I know that story firsthand. Data shows that the most effective strategy to prevent children from starting this deadly habit is to price it out of their range," Durbin said. "This bill would help reduce tobacco and e-cigarette use by ending loopholes that the industry has exploited to target our children. If America can kick its nicotine addiction it would go a long way to improving our public health for generations to come."

The bill would also follow the lead of 21 states and Washington, D.C., that already tax e-cigarette and vapor products.

"Loopholes in our tax code continue to favor big tobacco while the American public, especially our youth, pays the price," Krishnamoorthi said. "The Tobacco Tax Equity Act increases taxes on cigarettes and finally imposes taxes on the e-cigarettes hooking our children on nicotine, which would generate billions of dollars in federal revenue. As a father of a high schooler and middle schooler, I'm determined to make sure we end the youth nicotine and vaping epidemic."