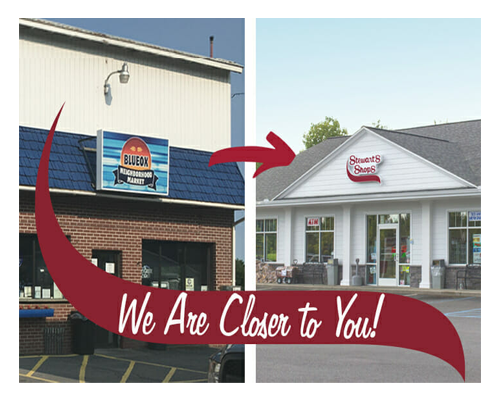 Stewart's Shops closed on its acquisition of Oxford, N.Y.-based Blueox Corp.'s chain of 11 Neighborhood Market stores, with rebranding complete at six of the sites. Five of the locations are branded as Stewart's Shops, while one location is outfitted as a Stewart's Express Shop.

The sale of its Neighborhood Market chain signaled Blueox Corp.'s exit out of the convenience retailing business. Citing increased difficulty to remain competitive as a midsize operator in today's c-store landscape, Blueox is realigning its long-term goals and continuing to reinvest in the company's delivery and service divisions of the company, as Convenience Store News previously reported.

"This acquisition will increase Stewart's Shops footprint further into the central New York market," Stewart's Shops President Gary Dake said at the time of the announced deal. "We look forward to this opportunity to further serve the Blueox market that they have served so well for the past three plus decades and we look forward to welcoming Blueox employees to the Stewart’s family."

In addition to rebranding the Neighborhood Market sites to Stewart's Shops, the New York-based operator is in the process of opening three newly rebuilt shops, and recently opened new shops in Rexford and Ballston Spa, N.Y., with a new shop in Barneveld, N.Y., expected to open by the end of the month.

"Our construction team is currently working on seven remodels and seven rebuilds to round out 2021," Stewart's Shops said on its website.