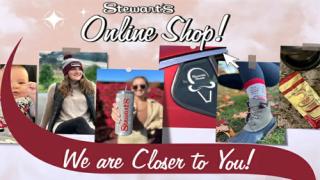 SARATOGA SPRINGS, N.Y. — Stewart's Shops has been focused on growing its network over the past few years, opening new convenience stores to be close to its consumers. And now, it is even closer.

The c-store operator is opening an online shop in time for the holiday season. The online shop will open its virtual doors at 9 a.m. on Cyber Monday, Nov. 28.

Stewart's My Money Cards and Stewart's Gas Cards will also be available in $25, $50 and $100 increments.

According to Stewart's, there will be multiple limited-run edition merchandise drops throughout the year. Stewart's Coffee, My Money Cards and Gas Cards will be available all year long. The retailer's ice cream is not available for shipping at this time.

The retailer added that customers have been asking for online store. Shipping is available in the continental United States.

Stewart's Shops is the latest retailer to bring its store to customers wherever they are. In August, 7-Eleven Inc. launched 7Collection, a specially curated online merchandise shop that features exclusive apparel and accessories inspired by 7-Eleven and its fan-favorite products like Big Gulp and Slurpee drinks, as Convenience Store News reported.

In mid-November, the Irving, Texas-based convenience retailer debuted a holiday assortment of gifts on 7Collection. The 7-Eleven-inspired apparel and accessories include holiday sweaters, knitted Stripes beanies and a Sherpa blanket.