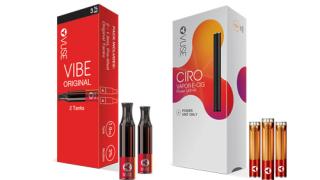 RJR Vapor, based in Winston-Salem, is an indirect subsidiary of BAT.

Similar to its decision on Vuse Solo, the FDA's recent decision applies to Vuse Vibe and Vuse Ciro original flavors. Menthol remains under review and can remain on market pending a decision from the agency, according to BAT.

However, the denied RJR Vapor's premarket tobacco applications (PMTAs) for other flavors.  Those flavored vapor products, in accordance with prior-issued FDA industry guidance, are not currently marketed or sold in the United States.

BAT said it is the agency's decision on those applications to determine its next steps.

"These authorizations represent the broadest portfolio of market authorizations provided to any company in the U.S for premarket tobacco product applications," said David O'Reilly, director of scientific research, BAT. "Continued focus on science and innovation has supported the robust submissions, which have enabled FDA to evaluate and authorize the marketing of these products.

"We are proud of the work undertaken by the team to achieve this significant regulatory milestone and are confident in the quality of our applications," O'Reilly said, adding that BAT is committed to tobacco harm reduction.

"As part of this commitment, we will continue to work with FDA to support access and choice for adult consumers," he said.

RJR Vapor's PMTA for Vuse Alto remains under review and will continue to be available for on the U.S. market. That PMTA was submitted nearly a year after Vuse Solo, and five months after Vuse Vibe and Ciro, and those applications share foundational science, according to BAT.

In October, the FDA authorized RJR Vapor's Vuse Solo electronic nicotine delivery system to remain on the market. The decision was the first time the agency authorized a vapor product for the U.S. market — and it came more than a year after the PMTA deadline for vapor products.

Since then, however, the agency has been slow to make decisions on PMTAs submitted by major vapor brands.

Until recently. According to Owen Bennett, senior vice president, Equity Research with Jeffries, in the past six weeks the FDA issued favorable marketing orders for Logic and NJOY products but issued marketing denial orders to Fontem US LLC for several myblu products.

Those decisions came soon after the FDA signaled it was moving closer to wrapping up its review of the premarket tobacco applications for vapor products, including those from major companies.

As Bennett pointed out, the majority of the agency's decisions have been for cig-a-like products and not pod-based vapor systems, except for myblu and NJOY.

"With today's orders, the only vapes left now where there has not been a decision are the BAT pods (Alto) and the Juul pods, also the biggest two brands on the market by some way, with estimated 15-percent and 25-percent market share, respectively, in 2021," Bennett said. "The bigger read for us, therefore, is that these decisions could come very soon. We continue to believe they will come next week, to coincide with a recent court-mandated PMTA status update on May 16."