CHARLESTON, S.C. — Refuel Operating Co. LLC is making a name for itself as one of the fastest-growing convenience store retailers in the United States, and has no intentions of slowing down.

What began as a single-store operation in 2010 has grown into a network of nearly 130 c-stores spread out across a five-state footprint.

"We love what we do. This is a great business to be in. Our mission is to continue to enjoy the industry and continue to grow," Refuel CEO Mark Jordan told Convenience Store News.

Jordan isn't a stranger to the convenience retailing industry. After working for Road Ranger, a Rockford, Ill.-based travel center chain, he opened his first c-store in his native Charleston, S.C., in 1998, and subsequently four more. In 2005, he sold the five sites to The Pantry Inc.

Together, the duo found complementary and synergistic ideas for how to drive innovation and growth. Refuel's acquisition-based strategy is designed to roll smaller c-store properties into a larger entity, achieving the advantages of enhanced operational efficiency, scale and brand-building across a wider geographic footprint.

Armed with this strategic vision and approach to the business, Refuel entered into a partnership with First Reserve, a global private equity investment firm focused exclusively on energy, in April 2018. They formed FR Refuel — a move that created a new entity that absorbed Jordan's original Refuel operation and brought enhanced capitalization to support an aggressive, acquisition-based growth strategy.

"When Mark and I started talking about growing Refuel, the plan was to do it rapidly, so the short-term goals included finding a capital partner that was aligned with our mission," Smith explained. "Our partnership with First Reserve was mutually beneficial from the start. Understanding our industry is in their DNA, and they get as excited about the c-store business as we do and know what it takes to grow. We move extremely fast and we found a partner that can move at a rapid pace with us."

Just one year after forming FR Refuel, the entity was gearing up for rapid expansion. Its first deal grew the company's network sixfold with the acquisition of Hartsville, S.C.-based West Oil Inc., operator of 26 c-stores in northeastern South Carolina. The sites, which operated under the Markette and West Oil labels, were rebranded and upgraded to Refuel, bringing the company's total store count to 31.

The following month, in June 2019, Refuel closed on its second acquisition, picking up Bishopville Petroleum Co. in Pee Dee, S.C., and adding two high-volume, high-trafficked stores to its portfolio. This deal — which also included wholesale distribution and added approximately 20 wholesale fuel customers in the Palmetto State — brought the company's store count to 33 locations.

In July, Refuel announced that it would beef up its presence in the Charleston market through 10 new store builds via a $50 million investment. The retailer opened four of these new sites in 2020, with the remaining six sites slated for 2021.

"I was born in Charleston and know the market. It is unlike anywhere else and is an exciting place to be. Because it is a hot market, we want to dominate as much as we can," Jordan explained.

Refuel kicked off 2020 with the addition of two locations to its portfolio through the acquisition of Myrtle Beach, S.C.-based Turtle Market. On the day of the closing, the company began construction on a third location, bringing its reach to 35 c-stores.

A month later, in February 2020, Refuel entered into its fifth acquisition deal, whereby it picked up Indianola, Miss.-based DoubleQuick Inc. This transaction expanded the company's footprint into Mississippi and Arkansas, and scaled it dramatically with the addition of 48 c-stores and five standalone quick-service restaurants.

The acquisition added significant brand value to Refuel's portfolio because of the high-profile and loyal customer base of DoubleQuick stores in the regional market. It also added an impactful new offering to its foodservice lineup thanks to DoubleQuick's proprietary fried chicken concept, Hot N' Crispy Chicken.

"DoubleQuick was attractive because of its best-in-class foodservice program. Convenience foodservice is not something that is easy to break into, but DoubleQuick figured it out a long time ago and we were fortunate to meet them when we did," Jordan told CSNews, adding that it is the only chain Refuel has acquired that the company does not intend on rebranding.

With the DoubleQuick transaction in the books in April 2020, FR Refuel's total store count reached 113, and the retailer was ready to grow again. The company was approached by an advisor for Holmes Oil Co./Cruizers founder Edward Holmes about purchasing the 26-store chain. Refuel recognized immediately that the companies were synergistic, and the transaction closed less than a month from the time it was under contract.

"From my perspective, Edward was like a lot of sellers: he wanted to know his business was going into the right hands that could take the business in the direction he ultimately wanted it to go, and we made him feel comfortable in his decision," Smith recalled. 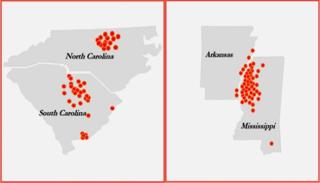 When Refuel closes on the acquisition of Wag-A-Bag LLC in the third quarter of 2021, the company will enter Texas and operate nearly 130 stores.

Next up is the acquisition of Wag-A-Bag LLC, which was announced in May 2021. Headquartered in Round Rock, Texas, Wag-A-Bag was founded in 1964 by the Rabb family and operates 16 convenience stores in the greater Austin market. This transaction will mark Refuel's entry into Texas.

"The Rabb family has built a great company over the years and has established a reputation of providing incredible customer service and a superb shopping experience to its customers," said Jordan. "We look forward to welcoming their employees to the Refuel family. In addition, we are excited about expanding Refuel's network of stores into the very attractive and rapidly growing central Texas market. We are thrilled to add such an exceptional business to the Refuel platform."

Subject to customary closing conditions, including regulatory approval, the deal is expected to close in the third quarter of 2021. Once completed, Refuel's total store count will increase to 130 locations.

Looking ahead, the company has even more aggressive growth plans for the future.

"Our mission is to grow three to four times our current store count size and be a best-in-class convenience store chain," Jordan said.