NATIONAL REPORT — The convenience store industry landscape is constantly changing as chains open and close stores each week. On a regular basis, Convenience Store News highlights these comings and goings in this special roundup. 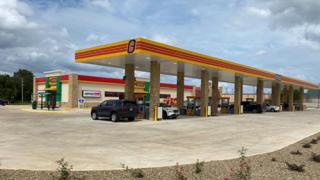 CEFCO Convenience Stores celebrated the grand opening of its newest store located in Kilgore, Texas. A Huddle House location will be connected to the store.

Customers can find a variety of hot and cold food items, including CEFCO Kitchen made-to-order burritos, tacos and bowls, as well as hand-breaded fried chicken, pizza and breakfast sandwiches.

Huck's opened its new store in Newburgh, Ind., in early September. The convenience store chain partnered with GSP Retail to develop the location. The two companies paired up in 2019 to rebrand and refresh the Huck's brand and its stores. This is the third location Huck's and GSP worked on together.

GSP's work includes all interior signage, graphics, wayfinding, and LED elements as well as exterior design and installation of a new décor package which consists of oversized logos on brick, outdoor textiles, and assistance with the outdoor seating.

The Mims travel stop is Love's 19th location in Florida and adds more than 180 parking spaces to Brevard County. At more than 11,000 square feet, its amenities include 93 truck parking spaces, 87 car parking spaces, four RV parking spaces, eight diesel bays, seven showers, laundry facilities, and a dog park. It also features a Hardee's, and Speedco is set to open at a later date.

Mirabito rang up customers at a new location in Binghamton, N.Y., on Sept. 27. The convenience store features a kiosk ordering system and drive-thru service. Plans for an additional store in the area are under review.

The site follows openings in Gardendale and Oxford, and the retailer plans to open a location in Alabaster later this year — marking its fourth location in the state.

Both pump-and-go locations offers a variety of features to serve our on-the-go consumers, including: self-checkout, LED lighting for safety and energy efficiency; freshly made burritos and sandwiches prepared throughout the day in the store's onsite kitchen; a variety of beverages, including fresh bean to cup coffee and fountain beverages with nugget ice; a rear diesel island; and the new Pro Driver rewards program for professional drivers.

As part of the conversion to a TA Express, the site was remodeled to include new restrooms, showers, laundry facilities and a driver lounge.

"Franchising our TA Express brand has allowed us to expand our network to serve more travelers," said Jon Pertchik, CEO of TA. "We are pleased to have another updated, refreshed facility for the many professional drivers and motorists passing through the Houston area."