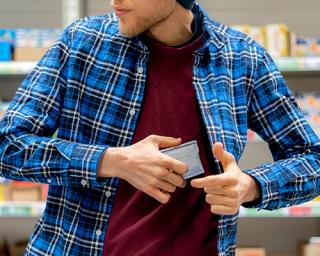 Given the small dollar amounts traditionally involved, shoplifting long has been viewed as a petty crime. But now, large-scale criminal enterprises are utilizing seemingly small crimes like shoplifting on a massive scale to help fund other more nefarious crimes. In the process, corner markets in neighborhoods across America are becoming the front lines in the battle against organized crime and terrorism.

Between 2001 and 2003, the Ghali organization — a shoplifting gang — recruited hundreds of members to steal over-the-counter medicinal products and other items such as infant formula, glucose test strips, razors and pregnancy test kits for an estimated value of $5 million. This organized retail crime (ORC) ring then funneled some of the money overseas to countries such as Jordan and Egypt.

At the time, ORC was seen as an anomaly. But two decades later, ORC is at an all-time high and much more dangerous criminal organizations — including terrorist cells, major drug cartels, and the mafia — are reaping the benefits.

ORC includes professionalized shoplifting, cargo theft, and other sorts of retail crime carried out by a criminal syndicate. Similar to other forms of illegal trade, of which these syndicates also employ — like the smuggling and selling of illicit tobacco or counterfeit goods — ORC is viewed as a high-profit, low-risk activity by perpetrators. Unfortunately, it is anything but low risk for law-abiding citizens.

During the economic crisis fueled by the COVID pandemic, ORC was costing the U.S. economy $125.7 billion in lost economic activity. It was also costing federal and state governments roughly $15 billion in tax revenues, money that should be used for infrastructure and public services.

The impact of ORC extends beyond economics, too. It is becoming more violent, increasing criminality in our communities, and serving as a source of funding for gangs. A 73-year-old man was hospitalized in Chicago after a shoplifting mob knocked him to the ground while stealing purses from a high-end retailer. In Los Angeles, a Rite Aid employee was killed after confronting an armed shoplifter who was attempting to flee the store.

COVID was not the only factor driving the increase of ORC. Criminals are taking advantage of communities where shoplifting is not prosecuted. Due to jail overcrowding, many states raised felony thresholds for shoplifting, effectively decriminalizing theft in some jurisdictions and resulting in fewer arrests and prosecutions. With this prosecutorial shift, organized criminal enterprises that previously relied on violent and drug-related income have repositioned and/or broadened their criminal operations to target retail.

The explosion of e-commerce has also played a large role in the uptick of ORC. Whereas a pawn shop or other physical location was often required for these operations a decade ago, criminals have now moved online. Today, many online marketplaces make it relatively easy to sell a large volume of stolen products quickly and anonymously with little or no oversight. This allows criminals, under the guise of legitimate retailers, to better shield their operations from enforcement and reach a wider consumer base.

Despite the significant investments made by retailers to combat ORC, criminals will continue their brazen thefts as long as they can anonymously sell their stolen goods through online marketplaces. There is no silver bullet to address this issue, but eliminating anonymity on these platforms by instituting basic accountability measures will protect consumers from illicit goods, aid law enforcement in their efforts to track organized crime, and make it more difficult for bad actors to profit from stolen or counterfeit merchandise.

Fortunately, state policymakers are increasingly exploring regulatory options to require online marketplaces to collect and verify third-party sellers' information. The federal Integrity, Notification and Fairness in Online Retail Marketplaces for Consumers (INFORM) Act is still making its way through Congress and could be another tool in the fight against criminal organizations involved in this activity.

States such as Florida, California and Illinois are also establishing task forces comprised of members of the private sector and law enforcement to address the challenges posed by organized retail crime.

While there are no simple solutions to tackling ORC, strong and dynamic public-private partnerships are a step in the right direction. By taking the fight to the criminal enterprises, we can ensure safer and stronger communities for all.

Editor’s note: The opinions expressed in this column are the author’s and do not necessarily reflect the views of Convenience Store News.