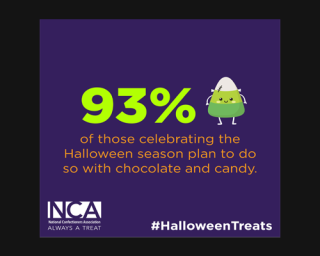 WASHINGTON, D.C. — No tricks and all treats is how consumers are prepared to celebrate Halloween this year.

According to a recent survey from the National Confectioners Association (NCA), 93 percent of Americans intend to celebrate in a big way with plans to enjoy their favorite chocolate and candy treats.

The association projects chocolate and candy sales to increase 5 percent for the 2022 Halloween season.

"The past few years have proven that the confectionery industry is resilient, and Americans remain enthusiastic about enjoying their favorite treats during seasonal celebrations like Halloween with friends and family," said NCA President and CEO John Downs. "Chocolate and candy play a special role during the Halloween season in communities across the country — and this Halloween promises to be especially impressive as chocolate and candy companies bring consumers classic, innovative and great-tasting products that enhance the season."

Other highlights of the survey include:

The national online survey was conducted by 210 Analytics on behalf of the National Confectioners Association. Research was fielded from Jan. 17–31 among 1,573 consumers ages 18–75.

Washington, D.C.-based National Confectioners Association is the leading trade organization for the U.S. confectionery industry, which generates more than $37 billion in retail sales each year.

Kicking Off the Party Early

The rise in chocolate and candy sales is partly due to consumers nationwide going bigger and bolder in their celebrations, with some starting earlier than in previous years.

In a recent survey conducted online by The Harris Poll on behalf of The Hershey Co., 60 percent of Americans agree that it is socially acceptable to start celebrating the Halloween season before October.

The survey also found that 70 percent of parents with children under the age of 18 say it is socially acceptable to start celebrating Halloween before October, and 75 percent of consumers agree that they start decorating the outside of their homes for Halloween as early as they want to.