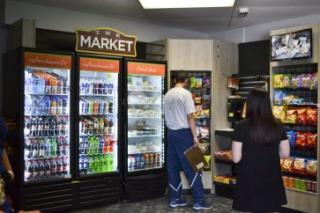 DALLAS — Army & Air Force Exchange Service's (AAFES) nearly 150 micro markets are growing rapidly as an option where service members can fuel up with better-for-you meals and snacks while staying close to their workplace.

Fully automated and contactless, the self-serve markets are positioned near soldiers, airmen, guardians and Department of Defense civilians working unusual hours or in high-traffic or out-of-the-way areas. Exchange micro markets can be found throughout the continental United States as well as one location at U.S. Army Garrison Bavaria in Germany.

First introduced in 2014 at the Raven Rock Mountain Complex in Blue Ridge Summit, Pa., micro markets are a fast-growing segment with 46 new locations opened in 2021. About 45 additional micro markets are planned to open throughout the continental United States in 2022, according to AAFES.

Offerings vary by location, with most offering fresh salads, fruit and other sustenance options that support a "BE FIT" lifestyle. Select locations also offer over-the-counter medicines, personal hygiene items and other sundries.

"Contactless shopping options are in demand, and the Exchange is excited to offer more self-service convenience for the military communities we are honored to serve," said Air Force Chief Master Sgt. Kevin Osby, Exchange senior enlisted advisor. "Micro markets strengthen the Exchange's longstanding commitment to 'go where you go' to support mission readiness and resiliency."

Micro markets offer a more varied product assortment compared to traditional vending machines. With micro markets, items can be displayed similarly to a traditional convenience store, only with a self-checkout system for contactless convenience. Micro markets at Fort Campbell, Fort Hood and Scott Air Force Base now also accept the MILITARY STARcard as the Exchange continues to expand this program.

As Convenience Store Newsreported, The Army & Air Force Exchange Service first expanded its offering of on-the-go meals and other products, including better-for-you options that support a "BE FIT" lifestyle at micro markets across the U.S. more than two years ago.

The "BE FIT" program features products meeting the following criteria:

Since 1895, AAFES has helped soldiers, airmen, guardians and their families to improve the quality of their lives by providing valued goods and services at exclusive military pricing. The Exchange is the 54th-largest retailer in the U.S.

One hundred percent of Exchange earnings support military communities. In the last 10 years, the Exchange has provided $3.4 billion in earnings for critical military quality-of-life programs. The Exchange is a non-appropriated fund entity of the Department of Defense and is directed by a board of directors. The Exchange is a 50th Anniversary Vietnam War Commemorative Partner, planning and conducting events and activities that recognize the service, valor and sacrifice of Vietnam Veterans and their families in conjunction with the United States of America Vietnam War Commemoration.