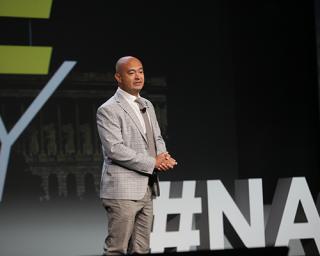 ALEXANDRIA, Va. — The trajectory of Jared Scheeler's journey in the convenience store industry may have gone differently if it hadn't been for a visit to a job placement center in 1998 when he was attending the University of Minnesota-Twin Cities.

As a business major, Scheeler envisioned himself working for corporate America and had his eye on the airline industry. But finding a job posting for Bobby & Steve's Auto World, a new-age, modern convenience store/service station on the edge of downtown Minneapolis, changed his outlook on entrepreneurship and business.

Starting as a cashier at Bobby & Steve's, Scheeler quickly moved up the ladder, running its flagship store before being promoted to director of retail operations in 2010, a role he held until 2013. Not long after, a combination of factors compelled Scheeler to start The Hub Convenience Stores Inc., now a chain of five locations throughout North Dakota.

Scheeler attended his first NACS Show in 2001, which first opened his eyes to the enormity and scope of the convenience store industry. He went on to join the association's Service Member Committee, followed by the board of directors, and last year assumed the role of chairman.

On Sunday, The Hub CEO delivered his final chairman's address at the 2022 NACS Show and with that, officially completed his tenure as the 2021-2022 NACS chairman.

Reflecting on his time as chairman in the days leading up the show, Scheeler told Convenience Store News that it's been a year of making "enormous progress" in moving big issues forward.

Key among them was introducing a bill to address credit card swipe fees — which he calls "outrageous, especially in these inflationary times" — and advancing "truly groundbreaking" initiatives such as TruAge, an innovative, universally accepted age-verification system developed by NACS and Conexxus that makes it more accurate to verify an adult customer's age when purchasing age-restricted products.

"The role of the NACS board of directors is to provide guidance to the NACS staff to move long-term strategies and initiatives forward. These are all big, forward-thinking projects that can transform our industry," Scheeler said.

Unlike his two predecessors — 2020-2021 NACS Chairman Kevin Smartt, CEO of Texas Born (TXB), and 2019-2020 NACS Chair Julie Jackowski, chief legal officer and secretary of Casey's General Stores Inc. — Scheeler benefitted from being able to travel without many restrictions for the year he served. Smartt and Jackowski's terms were impacted by the COVID-19 pandemic.

"We had our first in-person NACS State of the Industry Summit in three years, and other meetings also have been in-person as opposed to virtual. There is always more you want to do [during your term], but the return of travel is a big step forward," Scheeler stated.

Looking back on his year as chairman, he says he is honored to have represented "an amazing industry," and emphasized how special it is to lead an organization like NACS, which serves as an advisor to more than 1,300 retailer and 1,600 supplier members from 50-plus countries.

"The association prepares you well for your journey to the Executive Committee and chairman, so I don't need to offer procedural advice [to my successor]. I'll go back to what I said earlier — it's a continuum. We help advance big industry initiatives that have a life well beyond our term," he said. "Individually, there's an opportunity to positively influence the industry in a way that represents the next chairman's personality and industry passions. My advice would be to appreciate the enormity of that influence to help as many retailers as possible."

As he passes the gavel, there is one area of the industry in particular that Scheeler remains passionate about: he is committed to building out ways to connect the channel's small operators with ideas and each other.

"Small operators are the lifeblood of our industry and represent more than 60 percent of our store count. We don't have the same resources as larger companies to weather economic storms or downturns, but NACS and other industry groups do have resources and connections to help smaller operators," he expressed. "I've hosted several small operators at my stores the past few months. I think they've learned a lot, and I've learned just as much meeting them."

Scheeler is excited for what the future holds.

"What's next for The Hub is to continue to do what we already do: continually seek out new ways to delight our customers as they redefine what convenience means to them. And I'm excited for what our future as an industry and as a company holds for us," he said.