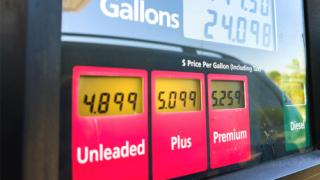 WASHINGTON, D.C. — Motorists have been paying less at the pump, but one convenience and gas veteran is raising concerns that lower gas prices may not be here to stay.

During an appearance on "Mornings with Maria" on Fox Business, Joe Petrowski, former CEO of Cumberland Farms Gulf Oil Group, said he is "absolutely certain" the United States will be in a recession.

Petrowski is currently an advisor to the chairman and director of Fuels at Yesway.

He added a recession usually comes along with "every energy crisis," especially since energy is 7 percent of gross domestic product, the broadest measure of goods and services produced across the economy, reported The New York Post.

As a potential recession looms, crude prices are still below $100 per barrel, though rising on weakened consumer demand, and if that trend continues gas prices could once again top $5, Petrowski noted.

"I really do believe as we go through the summer we're going to see crude reach back to $150 a barrel and oil before Labor Day will be at that level and retail gasoline prices will exceed $5 again," Petrowski said.

The State of Gas Prices

Petrowski is not the only one raising the caution flag over gas prices. Fueling up may also become more expensive as motorists take advantage of lower prices, according to AAA.

The association reported the national average for a gallon of gas fell to $4.21, down 14 cents since last week. But a slight uptick in gas demand as more people fuel up could end the steady drop in daily pump prices.

"We know that most American drivers have made significant changes in their driving habits to cope with high gas prices," said Andrew Gross, AAA spokesperson. "But with gas below $4 a gallon at nearly half of the gas stations around the country, it's possible that gas demand could rise." 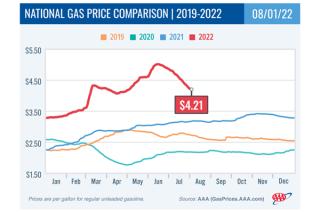 The State of Crude Prices

Additionally, crude prices rose after the market adjusted its expectations for supply since the Organization of the Petroleum Exporting Countries (OPEC) and its allies, a group also known as OPEC+, will most likely announce its output will remain unchanged for September at its videoconference meeting on Aug. 3, according to AAA.