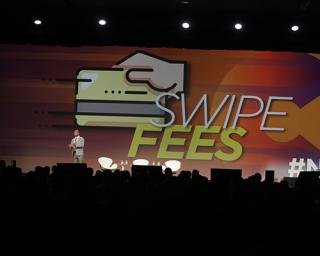 LAS VEGAS — NACS leadership highlighted the power of advocacy during day two of the 2022 NACS Show, praising convenience store operators for what they have already achieved and encouraging them to keep working together to achieve even more.

Outgoing NACS Chairman Jared Scheeler, CEO of Dickinson, N.D.-based The Hub Convenience Stores Inc., commended retailers for working together to speed up innovation and boost the c-store industry's reputation with both consumers and legislators.

Scheeler, along with NACS President and CEO Henry Armour, urged attendees to use the power of advocacy to tackle what Scheeler called "the most outrageous cost of them all:” credit card swipe fees, which he noted are the second largest line-item expense on a profit and loss statement.

Both industry leaders expressed optimism that the bipartisan Credit Card Competition Act of 2022 could do for credit card interchange fees what the Durbin Amendment did for debit card fees, reducing them by $11 billion or more each year.

Competition is the key aspect of the proposed legislation, according to Armour.

“We have an immense opportunity to fix this broken system,” he said. “The Credit Card Competition Act would bring long overdue competition to the credit card marketplace, significantly reducing these fees.”

Senator Roger Marshall (R-Kan.), co-sponsor of the bill in the Senate, joined Armour and Scheeler onstage during the day’s general session to share his perspective on how the lack of competition is serving as an "inflation multiplier."

"Once I figured out that there were four global banks and two credit card companies controlling this industry, I said ‘there’s a problem in here," Marshall recalled.

He encouraged the retailers in the audience to grow relationships with their legislative representatives and build on existing ones to communicate the importance of the Credit Card Competition Act. Retailers can also text "NACS" to 50457 or visit convenience.org/fixswipe to make their voices heard.

Scheeler called on his fellow small operators, in particular, to increase their engagement. Larger chains may have taken the c-store industry to another level, but "it's critical that we join the party," he said.

During his time as chairman, he found sources of inspiration everywhere, from eye-opening uses of technology in China to key insights at the NACS State of the Industry Summit.

"My return on investment is real and yours can be, too," he said.

The Future of Mobility

The general session also included a discussion of the future of mobility.

Dr. Gill Pratt, chief scientist and executive fellow for research at Toyota Motor Corp., touched on some of the "very big questions" about the transition to electric vehicles (EVs). While climate change is alarming and will require change, he said that change won't be a pure swap of fuel dispensers for electric chargers.

Pratt advocated the use of hybrid vehicles alongside pure EVs, and suggested that hydrogen fuel makes more sense for trucks. He also asked retailers to consider what high-value goods and services they can provide to customers during charging sessions. "I'm confident that great answers exist, and they represent a great future opportunity," he said.

Doug Haugh, president of Parkland USA, shared a list of key attributes that c-stores with EV charging should have based on Parkland's efforts to date: the placement of multiple chargers to address customer anxiety regarding availability; a strong amenity offer; and clean washrooms, as consumers are more likely to use these facilities during longer charging trips.

Retailers also should be prepared for different experiences with EVs depending on where they are located. "There is going to be a very uneven rollout," Haugh said. "The future has arrived, but it's not evenly distributed."

What matters more: the in-store experience or a brand's online presence in an increasingly digital world? The answer is "both," and savvy retailers will look for ways they can use an omnichannel sales strategy to create a fully connected physical and digital storefront, according to the presenters of the "Are You Phygital?" education session at the NACS Show.

Today's consumers are spending less time going into the store, but nearly two-thirds of customers say they are more likely to spend increased time with a brand online if they have a positive in-store experience. Physical experiences and digital experiences reinforce each other, according to Newberg.

Retailers, however, tend to rate their success at marketing personalization higher than their consumers do, leaving a gap between "what retailers think they're doing and what consumers think about it," Fenyo pointed out.

He noted that in the current "golden age of loyalty," it is important to use data to make recommendations and offers to consumers that are relevant to them as individuals and reflect their existing preferences, rather than generic offers that go to everyone.

The digital experience can serve as an introduction to physical products consumers may not have encountered yet. Lindsley highlighted a successful addition to Kum & Go's mobile fuel pay program. Customers who use the Kum & Go app to initiate and pay for their fuel purchase receive suggestions on various snacks that can be delivered to their cars "in a Sonic-like fashion" while they wait to finish fueling up. This has boosted foodservice items, as well as typical impulse purchases, according to Lindsley.

Strasburger noted that although some c-store chains may be too small to afford their own digital programs, they can still actively engage with customers and promote special offers through their social media channels. Operators can also "learn from the best" through their own phones by following successful brands to see what they're doing digitally and considering how those practices can be applied.

Building a successful convenience foodservice program means going through growing pains, but they can be mitigated by proper planning and learning from the restaurant industry, according to Joe Chiovera, executive consultant to Premium Brands Holdings, and Jeff Foley, director of foodservice at Temple, Texas-based CEFCO Convenience Stores, who together presented an education session on thinking like a restaurant.

Chiovera recommends retailers take a three-phased approach to foodservice: foundation before differentiation; building a culture of simplicity; and nurturing greatness.

"You have to segment your categories within food," he said, noting that certain segments should take priority so that c-stores can "dominate on what you do really well," while other segments may need to be downgraded to the level of basic participation based on what's actually happening in the present day, even if they were previously seen as important.

He also strongly advised that c-stores focus on gross profit dollars over margins. "Watching margins leads to bad decision-making in food," he said.

Overall, food-focused retailers should stay proactive but avoid rushing into anything, as they may live to regret it. C-store operators should also look hard at their in-store tactics, work with suppliers for solutions, and tread carefully when it comes to their core offer, said Chiovera.

Data is an important aspect of developing and implementing a foodservice strategy, according to Foley. "There are a lot of great places to get consumer insights out there," he said.

Foley described the process of developing a craveable menu with signature offerings that can be served in an efficient way through the use of kiosks. CEFCO Kitchen locations searched for a technology partner that could offer customized software and a quick, easy kiosk interface, while also revising the planogram for the employee side of the kitchen, making it easier for team members to prepare things efficiently without having to constantly crisscross the area.

He also stressed the importance of developing a foodservice culture. This takes commitment from the highest levels of the company, because brands will likely experience more failures than successes, Foley explained. Foodservice culture also carries more weight than the specific category strategies that c-stores may enact.

"Culture, to me, eats strategy for lunch," he said. "Strategy is about you; culture is about your customers."