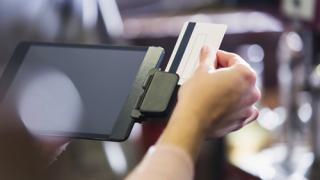 NATIONAL REPORT — Visa Inc. and MasterCard Inc. are preparing to increase the fees merchants pay when they accept consumers' credit cards, much to the dismay of retailers. According to the Wall Street Journal, swipe fees are set to increase in April, following a two-year delay due to the pandemic.

Most of the $1.2 billion in fee increases will come from higher interchange fees, which are paid by merchants to the card-issuing banks when shoppers use credit cards.

The MPC has since taken its efforts a step further. On March 8, it called on Congress to investigate Visa and Mastercard's "anticompetitive dominance" over the U.S. credit and debit card markets, citing President Joe Biden's call in his State of the Union address to fight inflation by increasing competition.

Swipe fees for Visa and Mastercard credit cards average 2.22 percent of the purchase price and totaled $61.6 billion in 2020, up 137 percent over the previous decade, according to the Nilson Report. The fees amount to an estimated $724 a year for the average U.S. family, according to MPC.

"The two giant card networks and their partner mega-banks routinely use their market power to stifle competition and charge merchants the highest swipe fees in the industrialized world," MPC stated. "It is crucial for Congress to act swiftly and implement real reforms to bring true competition, transparency and equity to the U.S. payments market."

"It's reprehensible for Visa and Mastercard to think now is an appropriate time to increase swipe fees," said Austen Jensen, senior vice president of government affairs at RILA. "Retailers are doing everything they can for American families and businesses under extraordinary inflation pressures, supply chain challenges, harmful tariffs and talent shortages. Global events are unnerving and contributing to unstable economic conditions, making now the worst time to add additional costs for American consumers."

If Visa and Mastercard choose to move ahead in the coming weeks with these swipe fee increases, it will show they have prioritized "squeezing consumers over supporting those facing significant economic hardships," added Jensen. "Retailers, the millions of workers they employ and the customers they serve implore Visa and Mastercard to halt these increases and recognize now is not the time to ratchet up their fees."