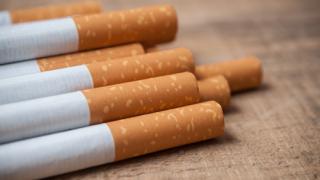 SILVER SPRING, Md. — The Biden Administration is taking steps to lower nicotine levels in cigarettes and other combustible tobacco products.

On June 21, the Food and Drug Administration (FDA) said it would develop a proposed product standard to establish a maximum nicotine level. The goal of the rule, according to the agency, is to reduce underage tobacco use, addiction and death.

A paper published by the FDA in the New England Journal of Medicine in 2018 projected that by year 2100, a potential nicotine product standard could result in more than 33 million people not becoming regular smokers, a smoking rate of only 1.4 percent, and more than 8 million fewer people dying from tobacco-related illnesses. The current smoking rate is 12.5 percent.

Plans for an established maximum nicotine level comes more than a year after reports surfaced that the Biden Administration was exploring the idea of requiring tobacco companies to lower nicotine to levels that are no longer addictive.

The FDA released the proposed new product standards in late April and laid out a timeline for the public to make its voice heard. The agency began accepting public comments on the proposed rules on May 4 and held public listening sessions on June 13 and 15 for individuals, communities and organizations to share their perspectives with the FDA.

It also gave the public until July 5 to submit either electronic or written comments directly to the dockets on the proposed rules. However, late last week the agency pushed back that deadline 30 days to Aug. 2.

The agency is also working its way through its review of the premarket tobacco applications (PMTAs) for tobacco products that fall under the 2016 deeming rule — the lion's share of which were filed for vapor products.

According to the agency, it remains focused on its regulatory oversight of e-cigarettes and other electronic nicotine delivery systems (ENDS). To date, it has taken action on approximately 99 percent of the nearly 6.7 million products for which PMTAs were received by the Sept. 9, 2020 deadline, including issuing marketing denial orders for more than 1 million ENDS products.

The FDA has also issued warning letters to ENDS product manufacturers and retailers who continue to sell products that are illegally on the market.

Taken all these actions together, the FDA is certainly busy.

"With the FDA still in the midst of PMTA reviews for vapor (concluding in September 2022), and just getting its menthol ban rule making underway, the agency clearly has a lot on its plate in terms tobacco control," said Viven Azer, director and senior research analyst at Cowen & Co.

According to Azer, menthol regulation could still be five years out, taking potential litigation into account. During that time, menthol products will most likely remain on the market.

"Menthol regulation likely to impact over 30 percent of the $80-billion cigarette market in the U.S. A reduced nicotine policy would impact the entire market but is likely still a decade out. Importantly, the research the FDA commissioned on a reduced nicotine policy assumed that there were lower risk nicotine delivery systems available to serve as a viable landing spot for cigarette smokers," she said. "With the FDA still evaluating vapor, and with no heat-not-burn [products] commercially available in the U.S. today, we expect to see an orderly prioritization of policies to ultimately ready the market and consumers for a meaningful reduction in nicotine levels in combustible cigarettes."