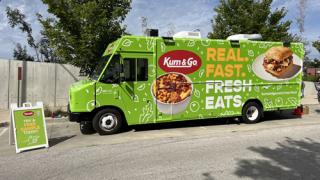 NATIONAL REPORT — Foodservice is still one of the highest margin offerings in a convenience store, and today's c-store retailers continue to step up their game to compete with quick-service restaurants (QSRs), fast casual, casual dining and other retailers that offer food to consumers.

But it's not enough to just offer high-quality food options in the store in order to succeed in foodservice. Customers need to know it's there, and then take the plunge to try it — especially with new items.

"It's about upping your game on your food offering and then making your value proposition known to your demographic," said Patrick Nycz, founding president of NewPoint Marketing, based in West Lafayette, Ind. Citing menu innovation as one of the hottest trends right now, he noted that c-stores should be creating items in line with the demographics they serve.

"Make sure whatever you have aligns with your target audience based on location because that has a lot to do with what people are buying," Nycz advised.

All marketing — no matter the industry — starts with awareness. For instance, when competing with Dunkin' or Starbucks for the morning customer, people need to know that what a c-store offers is just as good, and then be willing to buy it, said Noor Abdel-Samed, partner and managing director of L.E.K. Consulting, based in Boston.

"The biggest hurdle is getting people to break from their regular routine of breakfast or dinner and try your location," he said, explaining that one advantage c-stores have over other industries is that customers can get additional items while they are there — items not available at their local Dunkin' or Starbucks.

Established customers should be incentivized to try a food item. For example, a chain could run a promotion where every time a customer spends $10 in the store, they can pick any food item up to $5 to try. "It's about awareness and then trial of the offering," Abdel-Samed said. "If someone is there, get them to try something."

In addition to traditional media advertising via television, radio, billboards — and today on streaming channels like Hulu for those who don't pay for ad-free content — c-store retailers are also looking for and testing innovative ways to get the word out about their food offerings.

In October 2022, Wawa Inc., a chain of 900-plus stores, signed a sponsorship deal for a multiyear partnership with four universities in Florida, making it the official hoagie of their football teams and other athletics. Additionally, Whitehouse Station, N.J.-based QuickChek, operating more than 150 stores, announced a NASCAR partnership with Petty GMS to promote the "Best Damn Sandwich in Town" with a No. 42 QuickChek Chevrolet.

Des Moines, Iowa-based Kum & Go LC, operator of more than 400 convenience stores, also leveraged a sports partnership to promote its foodservice items, joining with the University of Iowa's Hawkeye secondary football team, nicknamed Doughboyz, to launch an exclusive T-shirt line for fans. On the Thursday following every game of the season, the chain also offered $1 off whole pizzas at its Iowa stores for each interception made.

"This partnership was a great first step in the college athletics space and holds us true to our Iowa roots and Krause family history with the University of Iowa," said Taylor Boland, director of communications for Kum & Go, which is owned by the Krause Group.

While the retailer utilizes traditional media including television, radio and billboards to run its "Happy Food/Sad Food" campaign in all markets currently featuring its new food program, Kum & Go continues to think of new ways to promote its offerings as well.

The company launched its first-ever food truck in Des Moines "to help promote sales and the trial of the food," according to Boland, and it wrapped tankers of sister company Solar Transport in graphics that promote the new food program and its "Real, Fast, Fresh Eats" tagline.

"We will continue to explore creative tactics as we roll the food program out to our remaining markets in the coming years," Boland explained. The offering of made-to-order grain bowls, premium sandwiches on fresh-baked bread and blended smoothies launched in and around Little Rock, Ark., in 2021 and has since expanded in availability and menu variety.

Investing in good photography is very important when it comes to foodservice, according to Ernest Harker, founder of Ernburn, a retail consulting firm based in Draper, Utah, and the former head of marketing at Salt Lake City-based Maverik — Adventure's First Stop.

"A high-quality photo of a beautiful product tells the customer, 'We care enough about our product to show it in its best light.' It's subliminal," he said. "A chain like Carl's Jr. will spend the money on a food stylist and professional photography, and this is something c-stores need to be considering."

Another best practice c-stores can take from their QSR competitors is branded packaging for foodservice items. Rather than simple white packaging or sandwich wrapping, Harker recommends printed options with the store or foodservice brand on it.