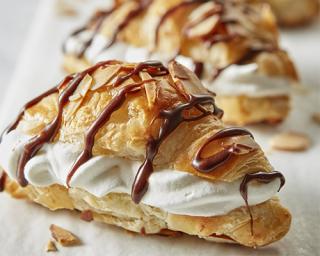 MINNEAPOLIS — Bread isn't just a key part of at-home meals. Americans' consumption of bread when dining out or getting takeout is on the rise, according to a nationwide survey commissioned by General Mills Foodservice and conducted by The Harris Poll.

During the past year, two-thirds of Americans (67 percent) report eating bread more than they normally would when dining out or ordering takeout and three in five Americans (60 percent) say they would rather indulge in a good bread item than dessert when dining out.

"Bread and the associated carbs used to get a bad rap, but we are really seeing consumers come back to bread," said Chef Curt Wagner, part of the Chefs of the Mills team. "From home bakers attempting to make sourdough and banana bread to diners seeking out the bread items they love but don't have the time or skills to make on their own, it appears we are all craving and eating more bread. I expect to see a resurgence of indulgent and creative bread menu items in the year ahead."

Consumers who are eating more bread when dining out or ordering takeout during the past year are doing so because it is offered as a complimentary "starter" (52 percent); because it is comforting (45 percent); to fulfill a craving (36 percent); to indulge (29 percent); or to reward themselves (25 percent).

Other key survey findings include:

"Bread is more than an everyday staple, it's one of the greatest comfort foods that diners really look forward to and enjoy when eating out or ordering takeout, which gives restaurants and foodservice operations an opportunity to shine," Wagner said. "There are so many ways operators can move beyond basic bread to elevate their menus and use bread in new and interesting ways."

The Harris Poll commissioned by General Mills Foodservice was conducted online from Oct. 26-28 among 2,035 U.S. adults ages 18 and older.