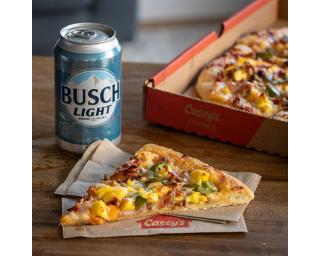 For a limited time only, Casey's customers can get a fast start to their day and enjoy the perfect tailgate taste with the Ultimate Beer Cheese Breakfast Pizza, according to the convenience retailer.

The specialty pizza starts with Casey's made-from-scratch dough, which is topped by a parmesan and cheddar beer cheese sauce rounded out with the balanced flavor of premium hops, barley malt and fine grains from Busch Light. The Ultimate Beer Cheese Breakfast Pizza is then loaded with bacon, sausage, ham,  scrambled eggs, onions, green peppers, and real mozzarella and cheddar cheese.

"Over the last two decades, Casey's breakfast pizza has earned an incredibly passionate fan following and our guests know that they can always get a delicious, fast and easy breakfast at Casey's," said Tom Brennan, Casey's chief merchandising officer. "For breakfast pizza's 21st birthday, we're going all out and giving our fans a new take with the Ultimate Beer Cheese breakfast pizza featuring a Busch Light beer cheese sauce.

"Our guests have long started their days with a slice (or two) of our delicious handmade breakfast pizza, plus a fresh-brewed, bean-to-cup coffee, so we're excited to give them a new twist this year as part of the celebration," Brennan added.

Casey's customers can enjoy several other breakfast deals throughout the fall, including any large breakfast pizza for 21 percent off from Sept. 7 to 14 when using the code BIZZA. Additionally, Casey's Rewards members who turn 21 in September can celebrate with a free slice of breakfast pizza that must be redeemed by Oct. 1.

"For a company their size, they continue to show that they won't rest on their laurels," said one judge. "We all know breakfast is our busiest food time, so innovating that menu is key. Utilizing their homemade dough to make sandwiches, along with adding breakfast bowls, was a great idea."