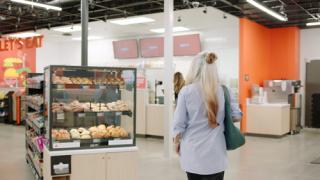 SEATTLE — Amazon Go is no longer just for urban consumers.

Amazon recently opened an Amazon Go store in Mill Creek, Wash., making it the first of the retailer giant's checkout-free stores to ring up customers in the suburbs.

The location features Amazon's Just Walk Out technology, and is designed to offer customers a quick shopping experience to pick up grab-and-go food, snacks and beverage items and a few everyday essentials. The retailer's Just Walk Out technology leverages a combination of computer vision, sensor fusion and deep learning that enables shoppers to shop the store, pick out what they want and skip the checkout. When shoppers arrive, they open the Amazon app, tap "In-Store Code," and scan in with the QR code presented.

Moving to the Suburbs

Amazon announced in January that it was making the move into the suburbs. The population of Mill Creek, which is located northeast of Seattle, is just 20,000 people — much smaller than the cities in which Amazon currently operates its checkout-free stores.

The company's decision to move Amazon Go away from city centers and job hubs comes as consumers continue to work from home, either full time or in a hybrid model.

Costs also play a factor. The company reportedly estimated that the cost of technology required to operate a 1,000-square-foot Amazon Go store has declined 96 percent since 2017, dropping from $4 million to just $159,000, as Convenience Store News previously reported.

Another new Amazon Go store is slated to open in the Los Angeles metro area in the next few months.

Amazon debuted its Amazon Go format in Seattle in January 2018. It first opened the convenience-style store with Amazon employees only on Dec. 5, 2016, in a test phase. At the time, Amazon said it expected members of the public to begin shopping the store in early 2017. However, the retailer faced challenges along the way, like correctly identifying shoppers with similar body types, and children moving items to incorrect places.