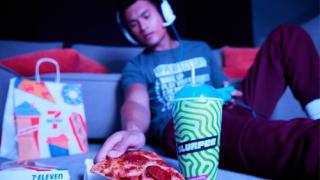 IRVING, Texas — 7-Eleven Inc. has teamed up with a sports-action video game to power gamers.

The convenience retailer is collaborating with Rocket League, a video game that features a high-powered hybrid of arcade-style soccer with vehicular mayhem, to boost players to the next level. With exclusive in-game 7‑Eleven customization items and a fan-designed, real-life 7‑Eleven car hitting the road, there will be new ways for consumers to drive in style, according to the retailer.

In addition, 7-Eleven is offering a limited-time Blue ROCKETberry Slurpee drink with an exclusive cup that changes color on contact with a cold drink and is topped with a Rocket League ball as a lid.

"7‑Eleven's social followers love sharing their 'carfies' with us (AKA photos of their sweet rides in front of 7‑Eleven stores) using the trending hashtag #CarsOf7Eleven and Slurpee-loving car enthusiasts have even organized unofficial car meetups in our parking lots across the country," said Marissa Jarratt, 7‑Eleven chief marketing officer. "So, it felt right to give car fans the chance to boost their ride in the Rocket League arena… While also helping us design… and potentially win… a Rocket League-inspired car IRL."

7‑Eleven's products will hit the Rocket League pitch through a selection of exclusive in-game items that can only be accessed by purchasing Mountain Dew, Doritos and select food and beverages products at participating 7‑Eleven, Speedway and Stripes stores. Customers who purchase these items via the Speedy Rewards or 7Rewards loyalty apps, or through the 7NOW delivery app, will be given a chance to unlock a code to boost their ride while playing the game.

According to 7-Eleven, there are six unique items inspired by real crowd-favorites, including an animated decal that looks like a classic Slurpee drink and an antenna and topper with a Big Bite hot dog.

Moving from the screen to the real world, 7‑Eleven fans can help design and win a car — called Model 711 — by choosing everything from a wrap design, rim color, seat design, custom grill, snack holders and even the scent simply by voting on social media. The retailer will provide more details on social media and its website.

"Our collaboration with 7‑Eleven is a first-of-its-kind for Rocket League and Psyonix, partnering with a retailer to offer our fans and theirs, unique content both in and out of game," said Phil Piliero, vice president, Psyonix co-studio head. "The color-changing Rocket League Slurpee cup is one that I'm personally excited for, and I know our fans will love it as well as the Slurpee themed in-game customization items."

Irving-based 7-Eleven operates, franchises and/or licenses more than 14,000 stores in the U.S. and Canada. In addition to 7‑Eleven stores, the company operates and franchises Speedway, Stripes, Laredo Taco Co. and Raise the Roost Chicken and Biscuits locations.