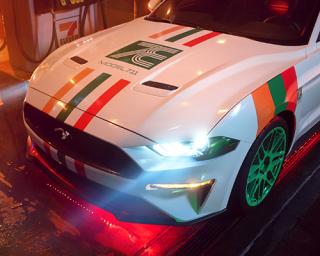 IRVING, Texas — 7‑Eleven Inc. has expanded its collaboration with Rocket League, a popular sports-action video game that features a combination of soccer with rocket-powered cars.

7‑Elevenenlisted the help of Cristo Fernández and Toni Breidinger to take its collaboration with Rocket League to the next level. Fernández isn't just an actor with soccer moves on set for his award-winning TV show, but he also played the game professionally in Mexico. Meanwhile, Breidinger speeds around the competition on the racetrack while making her way around the virtual gaming world as a professional driver.

"The response from customers to our collaboration with Rocket League thus far has been truly incredible," said Marissa Jarratt, 7‑Eleven executive vice president and chief marketing officer. "Whether they're racing to 7‑Eleven, Speedway and Stripes stores to snag the coveted Rocket League-inspired color changing Slurpee cup or setting out to earn all six in-game customization items, our customers have gone above and beyond to boost their game play. And now, we're thrilled to take this collab to Eleven with a head-to-head celebrity Rocket League competition between Cristo Fernández and Toni Breidinger, where fans will see them put their soccer and racing skills to the test in-game."

Slurpee drinkers can continue to fuel up with 7-Eleven's Blue ROCKETberry Slurpee drink and one of our four limited-edition, color-changing straws featuring Octane and Fennec car mold clips, available at participating 7‑Eleven, Speedway and Stripes locations.

7-Eleven also revealed its completed Model 711. Brought from a dream to reality by the famous automotive restoration shop Galpin Auto Sports in Los Angeles, customers will have the chance to win this 2021 Ford Mustang by purchasing select items at any 7-Eleven, Speedway and Stripes convenience store.

With a classic racer wrap featuring the 7-Eleven colors, this custom car features green rims and a cherry red underglow, mirroring the neon 7-Eleven sign that glimmers after dark. The driver of the Model 711 will sit on leather seats adorned with red, orange and green sunset stripes. What's more, this car will be driven with the assistance of a Slurpee drink gear shift as an ode to the convenience retailer's frozen beverage.

"We know our customers have an affinity towards car culture, so building a one-of-a-kind car inspired by our most iconic products was a no brainer," said Jarratt. "We had hundreds of thousands of 7-Eleven car fanatics and customers interact with the voting of customization elements for the Model 711, and now one lucky customer still has a chance to win these unbelievable wheels. We can't wait to see the places they'll go and the many #CarsOf7Eleven pics they'll take."

Irving-based 7-Eleven operates, franchises and/or licenses more than 13,000 stores in the U.S. and Canada.